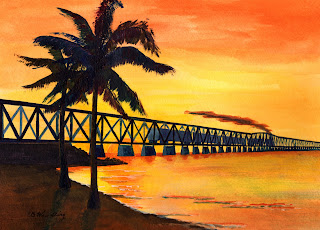 Last Train to Paradise
by CB Woodling, c 2010
The painting above was inspired by a fascinating book Last Train to Paradise: Henry Flagler and the Spectacular Rise and Fall of the Railroad that Crossed an Ocean by Les Standiford (2002).  The title speaks for itself, but the story of the railroad which opened Florida to tourism and linked the mainland to the Florida Keys is one of extraordinary vision, engineering marvels and the persistence of mankind in the face of the unforeseen, unpredictable, and unprecedented forces of nature.  Nature, in this case, arrived in terrible and awesome power in the form of the Labor Day Hurricane of 1935, arguably the most intense and strongest hurricane to hit the United States.  My painting depicts the triumph of mankind with the vision of the train traversing endless water, but the tinge of "red sky at morning" hints at nature's wrath to come. 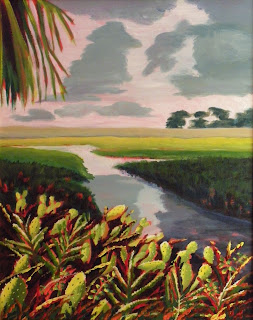 Suwanee River Delta
be CB Woodling, c 2010
As the coastlands of the southern river marshes merge with the shore, the land smooths out from prickly tropical vegetation into a seemingly never ending expanse of grasslands, spreading to the horizon.  The sky, too, seems endless, almost becoming one with the land and rivers as they both meander slowly to the sea.  What a stark landscape at first view, but teeming with lifegiving waters, nourishing both land and sea.
Posted by CB Woodling at 5:20 PM No comments: