Of Abstracts and DNA

What a wondrous time we live in, as scientists unravel the secrets of DNA, and help us in fighting disease using our own DNA. But science is not always used in beneficial ways... I recall the movie Gattaca, which showed the darker side of being able to control our own DNA.
*
This painting is both a tribute to and a cautionary note about "unlocking the genome"... in a very abstract way. I hope you find it interesting.
*
"Unlocking the Genome"
by CB Woodling, c. 2009
Posted by CB Woodling at 10:49 PM 2 comments:

Ballroom dancing is hotter than ever, with all the dance shows now airing on TV. My husband and I are among an increasing number of couples who are taking up ballroom dancing as both a nice way to spend an evening together and a way to get some enjoyable exercise. So, though I really prefer to paint landscapes, I have done several paintings of dancers.


This group of paintings are from my Dance Series completed in 2007. The first three are inspired directly by paintings of Jack Vettriano and may look familiar.
.
.
"Dancers on the Beach 1" by CB Woodling, c. 2007 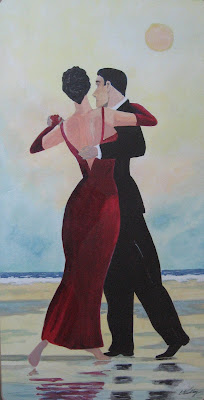 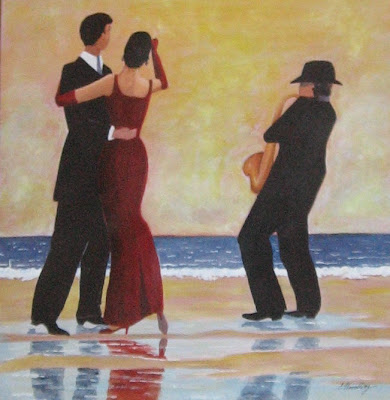 .
.
The following two paintings were inspired by photos of actual ballroom dancers. The elegant body lines and dramatic costumes really captured my interest. 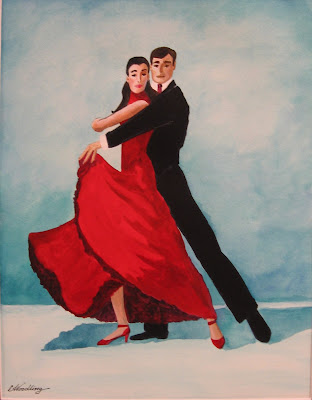 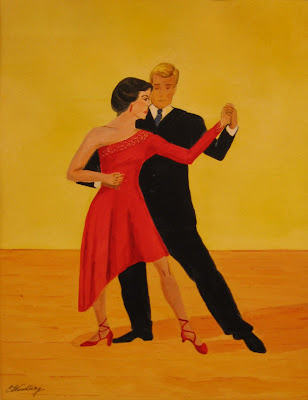 I hope you enjoyed these and remember some fun times you may have had on the dance floor, even if you've only done ballroom dancing in your dreams.
Posted by CB Woodling at 10:24 PM No comments:

These two paintings are inspired by the symmetry of bridges and the beauty of city scapes. I hope you enjoy.

Pittsburgh, Pennsylvania, at the confluence of three rivers, is known as the city of bridges. It's also known for the spectacular skyline that appears, almost magically, as you drive in to the city through either winding mountains or tunnels. When you actually see the city as you exit the tunnel (or wind around the last mountain), the city immediately surrounds you and it's really unexpected and breathtaking.
.
.
"West End Bridge, Pittsburgh", by CB Woodling, c. 2009 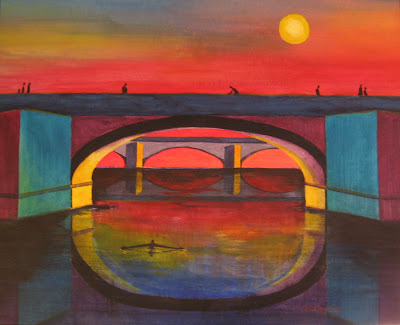 
The above water scene is not so very different from the Siesta Beach Lifeguard Stand Series I did a few years earlier (see my first blogs for views of Siesta Beach). I find the contrast of the forces of nature and the man made buildings to be particularly compelling. Man adapting to and fortifying against the seas and oncoming storms by providing shelter and light as in the above painting... or man setting up guard posts and shelters for fellow swimmers as in the Siesta Beach Series.

Similarly, I find farm scenes equally fascinating ... man partnering with machines and animals to share in the bounty of the earth. I hope these landscapes portray both the beauty of nature, even in storm swept skies, and the relationship that man has with the environment.

What a gift we have in the world that surrounds us! 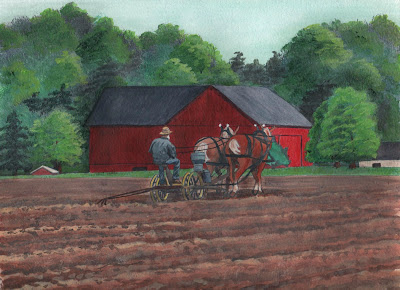 Posted by CB Woodling at 9:14 PM No comments: