Summer nights in Ohio...
Hot days simmer down to a cool evening breeze,
Lightning bugs flicker under deep shadowed trees,
As the sounds of a band striking up evoke yesterday memories.

This Victorian inspired Gazebo sits in the middle of Medina, Ohio's Uptown Square. Though the current Gazebo is relatively new, having been built in 1972, band concerts in the square have been held in Medina since the mid-1800s. Today, summer band concerts at the "new" Gazebo continue the Medina tradition of families gathering to enjoy music in the summer twilight. 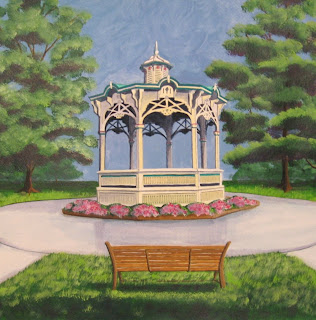